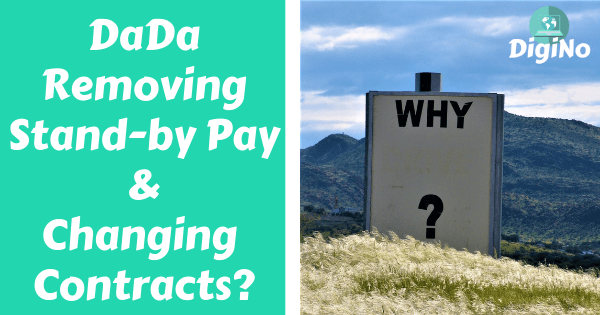 I wanted to write a little update on this situation due to the confusion of whether DaDa is offering standby time pay in 2019.

I currently am still receiving standby time pay so as far as I know, this has not changed.

I spoke to DaDa about what the new payment structure for new teachers means for standby time pay. (You can view the new pay structure in full detail here on the DaDa page).

Already hired DaDa teachers do not currently receive the new DaDa pay structure. However, new teachers once hired will be given a choice between the new and old pay structures.

Your base rate and standby time pay.

Your base rate + Easy to obtain bonuses, but without standby time pay.

But it seems the plan is to eventually move to the new pay structure for all…but that doesn't seem to be in the works just yet.

I wanted to write

What's going on? DaDa teachers received an email stating how “DaDa will subtract the contract period for some or all of your unbound students’ time”.

Here's a video trying to make sense of all this:

So it seems that if you do not have a regular student in your contracted hours, then this slot will be removed from your contract as of January 29th 2019.

This is a way to maximize the teaching time (and yes, remove standby-time pay).

So you will find now that when you try to check-in at your old contracted time, you will not be able to.

During the DaDa Hiring Freeze sage – teachers were asked to sign a new “agreement” which stated that contracted times could be changed with three days notice.

Members of the DigiNo Facebook Group contacted customer service and were told that if they wished to teach more then to use the Part-Time Hours function.

But wait…so what is the “Teach More” function all about?

Teach More in the DaDa app is similar to that of PalFish, where you can make yourself available to teach at any time. However, this doesn't really translate as well to DaDa as children aren't really as flexible with their time as much as the adult learners of PalFish are.

However, with the changes in the contract reported by many teachers, it seems none of these theories are true.

So it's a mystery to me what “Teach More” is all about.

If you have any more findings on these recent updates, please leave a comment.

Sorry to be the bearer of bad news, but just wanted to post this update as quick as I could to help the confusion.

If you're not happy with these changes, all I can say is…there's plenty more fish in the sea: